"St. Kilian” is a prime example of the architectural style during the time of the Salian kings. It is the fourth largest Romanesque cathedral in Germany and is home to exquisite artifacts from many centuries. 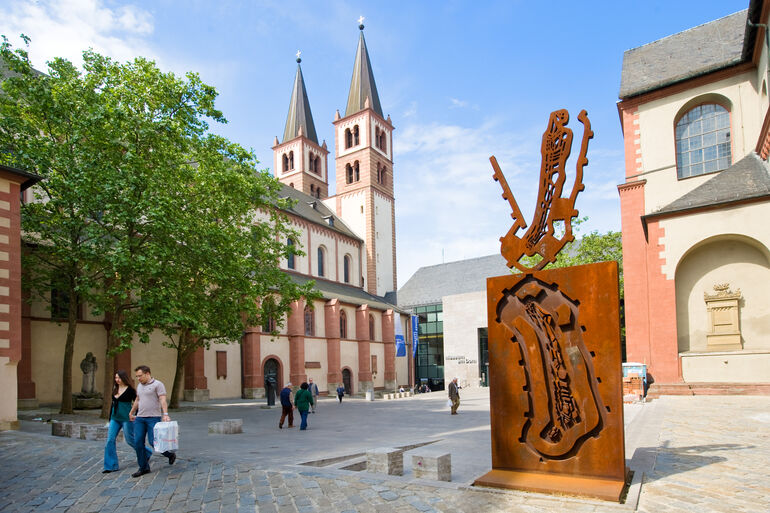 A principal work of German architecture of the 11th and 12th centuries. The construction started in 1040, the East towers were built in 1237. The interior was decorated with very ornate Baroque era stucco from 1701-1704 by P. Magno. The Cathedral burned out in 1945. After rebuilding was completed the consecration took place in 1967.

Exterior reconstruction according to the original. Some original Baroque stucco is still intact in the transept and the chancel. The altar, sacrament house, and choir stalls were made from 1966-68 by A. Schilling.1987-88 chancel redesigned by H. Elsässer. Among the impressive array of bishop’s grave stones are the monuments of Rudolf von Scherenberg (died 1495) and Lorenz von Bibra (died 1519) by Tilman Riemenschneider. Pipe organ by Klais (1968).

Added to the transept is the Schönbornkapelle Chapel, the burial site of the Prince Bishops of the House of Schönborn and an important creation by B. Neumann with fresco by R. Byß. On the South end, cloister with sepulcher; modern glass windows by G. Meistermann.

Daily guided tours (in German only) from April 2 to October 31, 2022 at 12:30 pm.
Fee: € 5 per person, reduced € 4
Duration: 1 hour
Tickets: at the "Dominfo" on the square in front of the cathedral or directly from the tour guide
Meeting point: Menora (seven-armed candelabrum near main entrance)
Note: Before each guided tour you can join a meditation with organ music, starting at 12:05 pm.

The cathedral is accessible for wheelchair users.