Make sure to visit “Marienkapelle” and "Neumünster". "Marienkapelle" is featuring some world renowned sandstone sculptures by Tilman Riemenschneider. "Neumünster" is a Romanesque cathedral dating back to the 11th century. 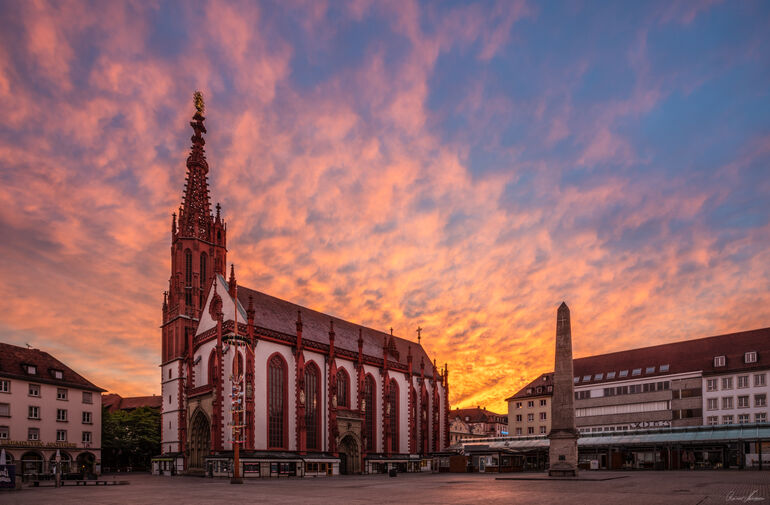 Late Gothic period hall church; construction started in 1377 and was finished in 1480 with the erection of a church tower. Elaborate ornamentation, especially in the arches of the doorways (figures of Adam and Eve by Tilman Riemenschneider replaced by replicas from 1975  – the originals are now on display at the Museum für Franken).
Interior was replaced after fire damage in 1945. The altar features four panels with paintings from 1514. Famous “Beautiful Madonna” (around 1420) and Silver Madonna (17th century).
Numerous tombs of Franconian knights and citizens of Würzburg, including the tomb of Konrad von Schaumberg (died 1499) by Riemenschneider and the tomb of the great Baroque architect Balthasar Neumann (1687-1753) at the market gate. 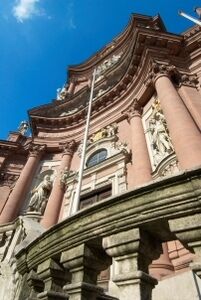 Neumünster
Romanesque cathedral from the 11th century. Chancel and ornate tower from the 13th century. Massive dome-shaped building with an extravagant Baroque façade dating from 1710–1716. Erected at the site of the grave of Saint Kilian and his companions, missionaries who were assassinated here in 689 AD. Madonna by Riemenschneider.
In the “Lusamgärtlein” garden (access from Martinstraße) is a memorial for the minstrel Walther von der Vogelweide. The cloister wing (around 1180) is considered a principal work of the Staufer era.